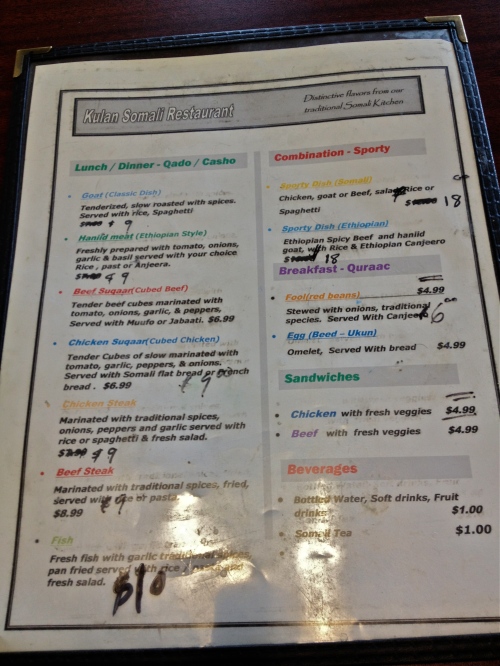 As with many Somali restaurants there are strong Ethiopian influences. We tried the Sporty dish (Ethiopian) with canjeero (anjera). It was not quite as described on the menu but came with Ethiopian style spicy beef and a bowl of mild yellow dal. $18 perhaps seemed a little steep for this meal, but it was part of a 5-person feast in which we all ended up paying $10 per person and had plenty of food as well as Somali tea and bottled water and the obligatory bananas. 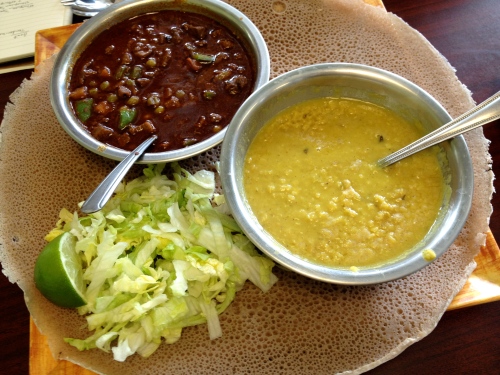 The roasted goat was fine, but not up to the level of Solay‘s. The chicken suqaar (chicken stew with small cubes of chicken) was very good. Our suqaar came with a side of the more-or-less typical Somali rice (long grain cooked with some fragrant spices and served with a few sauteed vegetables). 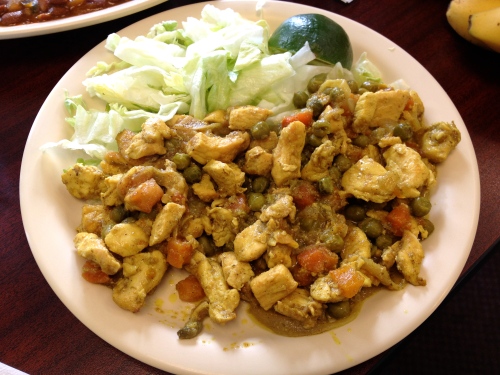 We also tried and enjoyed the fool (pinto beans cooked with tomato, onion, peppers and spices) which is most commonly eaten as a breakfast dish.

Thanks to your support, the dinners that we organized in September to raise money for the famine in the Horn of Africa were very successful. We were able to send $2400 to the American Refugee Committee who are working on the ground in Somalia, we also introduced some new people to Somali food, connected with the Somali community and had wonderful feedback on Nadira’s delicious cooking.

Sadly the famine continues to claim the lives of innocent children and we wanted to do more to support the victims of the famine. At this time of Thanksgiving when we give thanks for the food on our plates, please consider making a donation to the American Refugee Committee or attending one of our upcoming fundraiser dinners. The ARC are working very hard to improve conditions in the refugee camps and our assistance can help them to make a difference.

Here is a recent update on conditions from the ARC program director in Somalia:

“Fleeing for their life, many of the families have trekked for days before reaching Mogadishu. They left behind almost all of their household effects. They arrived in waves, populating spontaneously created internally displaced person (IDP) settlements within the city. They hardly come with containers to collect and store water, utensils to cook food, or spare clothes to replace the ones they’ve been wearing for days and weeks. Most of the temporary settlements still lack sanitary facilities. The IDPs who ended up in urban settings faced serious problems in finding proper open space to relieve themselves – in fact, women have to wait until sunset to venture out of the squalid settlements to answer nature’s call. Owing to shortage of water and the absence of latrines, many people are unable to bathe for extended periods of time.”

“After four months of sustained relief assistance by the international community, the drought and famine continues to ravage southern Somalia – and Mogadishu. Currently, there are more than 300 IDP settlements scattered all over Mogadishu. The conditions of many of these are quite squalid, crowded and with poor hygiene. The conditions are more stabilized in the major camps such as Badbaado, Rajo, and Taribunka (where ARC is working). In the latter two, many households are still without shelter, water, sanitation and food.  Many of the smaller settlements are without shelter and are not benefiting from regular food and water distributions. There is a huge gap between the resources available and the needs prevailing on the ground.”

The dinners will be held at Solay Bistro on December 7th and 14th at 7pm. Tickets are available online and are priced at $35 per person. There will be plenty of dishes for vegetarians.

The buffet style dinner will (almost certainly) include the following: