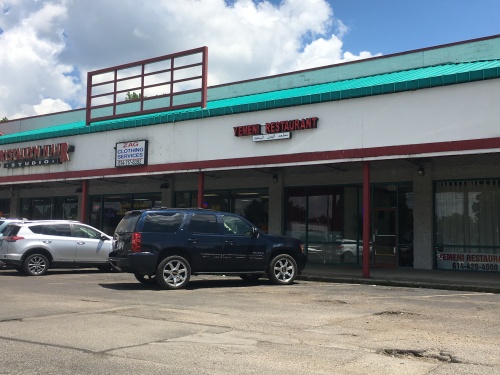 Yemeni Restaurant is just 3 months old, and they’re in the 161 & Cleveland avenue area, so the usual mixed bag of immigrant restaurant quirks is in full evidence – unavailable menu items, limited menus to look at, and perhaps understaffed on the service side (but very very kind). The space is spotlessly clean and a bit austere, all soothing greys and wood tones, and the dining room is divided into quadrants. The effect is curious, more that of a tech startup workspace than a place to eat.

Make no mistake, though, the eating is good, and in some respects unlike anything else you can find in the city.

“It’s hot”, the server said, as he rested the cast iron pot of bubbling stew on our table. it was held in a charred wooden box. “Even the box”, he elaborated, and he wasn’t being cautious. Two baskets mounded with flatbread followed, as did another stew and a lamb platter.

We tore bread and dipped pieces into the first pot, called fahsa, and ate. Within a bite, our understanding of the word ‘savory’ was redefined. A bit of googling explained that the dish is primarily meat – often lamb but in this case goat – cooked in its own broth. And, cooked to the point that it lies somewhere between a stew and a porridge.

It has to be said, that even with the wide variety of eating experiences we like to pride ourselves on, we found it strange. We also thought it unreservedly delicious. It’s the kind of fizzy moment worth seeking out – with a taste we’ve experienced something truly new to us, and our world is made ever-so-slightly larger and better off for it.

The other pot contained ‘foul’. Both the dish and the name are common throughout the Arab world, though most we’ve experienced amount to cooked fava beans with accompaniments, while the Yemeni version was closer to a thick chili. We’ll take the slightly spicy and more complex Yemeni style anytime, especially coupled with the flatbread.

The lamb dish, called ‘haneeth’, felt perhaps most familiar – bone-in lamb rested atop basmati rice and trimmed out with spaghetti and potatoes. This was very similar to any of a number of Somali-style platters, with small differences discernible in the flavor of the rice (I’d guess saffron), and the addition of sultanas. The lamb was flavorful, and perhaps just a bit overcooked and under seasoned for our tastes. 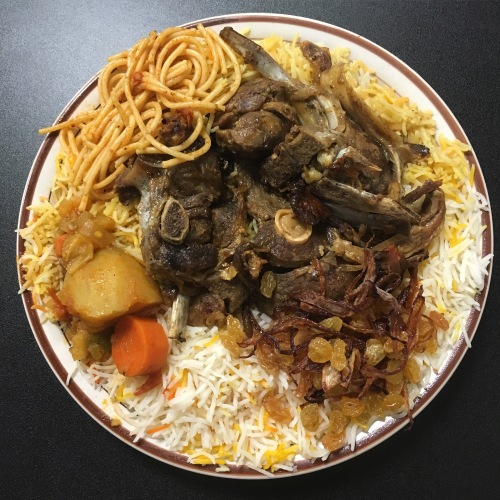 Add a clover-forward Adeni-style milk tea and a surprisingly satisfying frothy avocado juice, and that was our meal – which leaves over 80% of the menu unexplored, a percentage we intend to work down. Given our experience, we’d like to suggest that you should, too.