As a born-and-raised-in-the-midwest American who has designed restaurant interior spaces, I always find something vaguely disorienting about Japanese restaurant environments. Everything is extremely orderly and astonishingly similar to what you’d expect from a Western environment, except for when it isn’t, and those minute exceptions accumulate until the mind starts to melt from uncanny valley overload. The new Tensuke Express is like that, times 100, and I love it to the point that I’d go there just to sit in the space and puzzle over it even if the food was awful, which it isn’t.

Every second restaurant that opens in Columbus has this artful hodgepodge thing going on – mismatched chairs, scads of different light fixtures, fabric and material changes all over the place. Tensuke Express does too, but it doesn’t look like any of the rest of them. At all. While the norm is dark, brooding, reclaimed industrial, Tensuke Express is bright and shiny and new, with yellows and whites dominating. Sure, there are hanging window frames and rope decor elements, but also abaci, framed out room structures with names like ‘curry corner’, and dedicated bins for returning your chopsticks, soup spoons, and just about anything else you might accumulate during the course of your meal. It’s the rarest of things – a restaurant that doesn’t look, or even entirely function, like any other restaurant, but isn’t worse off for it. 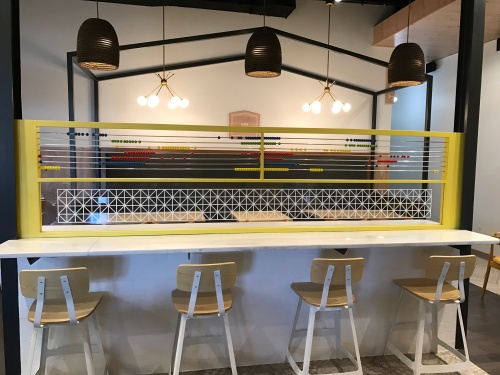 We weren’t the first customer in the space, but we were close enough to it to witness the celebratory picture-taking of the actual first. Restaurants are usually freaking the f*ck out upon open, but there was none of that – everyone we came in contact with (and they were emphatically not understaffed) was absolutely beaming with pride. The Japanese are well known for their reserve, but not even the strictures of culture could contain their unalloyed joy. As such, it was unexpectedly affecting.

So, lets get around to talking about food. Tensuke Express seems set up to primarily be a quick service noodle bar – ramen, soba, or udon. Pick a noodle, pick a broth, pick toppings, pay, get a buzzer that tells you when to pick up your order at the counter. There are some rice bowl and curry options, as well as a few sides, but those are relegated to a paper menu. It’s about the noodle bowls, people!, or so you’d gather from their prominence on the oversized menu boards.

We got ramen – one tonkotsu with chashu, one miso with spicy pork kimchi. They were served hot, enough so that it actually made sense to slurp as the Japanese do, and to understand why they do it. The noodles were perfect, period. I’ll hazard to guess that they are actually making their own broths in-house, and the effort shows – they might not have been the best I’ve ever had, but they’re good, and better than you’d have any reason to expect on a restaurant’s first day open.

Which is a good enough reason not to delve any deeper into food at this point – they opened strong, but there’s plenty of reason to expect they’ll get even better. We’ve been semi-regulars of the old Tensuke Express, and the only thing that might compromise that is the new sushi bar Tensuke’s owners are putting into the old Tensuke Express space. It should be open in a few weeks, and we’re eager to see it and tell you about it. Stay tuned.

This entry was posted in Uncategorized. Bookmark the permalink.