At the end of last year we wrote “In the short time it has been open, Ginevra has had an interesting evolution. It started as a Somali coffee shop offering coffee, tea, snacks and desserts but has recently expanded to offer a full lunch and dinner menu. Rather than providing a strictly Somali menu, they opted for mix of Middle Eastern, Mediterranean and Somali dishes”.  At that time the kitchen was being run by Mo, the nephew of one of Columbus’ well known Middle Eastern chefs – Nasir of Lavash (and formerly of Firdous).

Now Ginevra has transitioned again and they are serving a more Somali focused menu. Based on our recent visit and reports from Somali friends this change is proving very popular with their customers. On the night we visited the restaurant was almost full with large groups of Somali men animatedly discussing politics and soccer.

The menu is small with six entrees and four sandwiches. Entree options are lamb shank, beef or chicken steak, beef or chicken suqaar or fish steak. Each can be served with either rice or pasta. We would recommend the rice. The pasta was linguine in what tasted like jar-sauce. 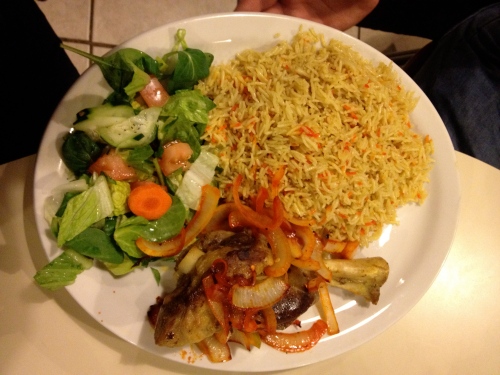 The lamb shank was tender and was served with sauteed onions and a mountain of Somali rice and salad. Optional hot sauce is available. We also tried the chicken steak, suqaar and the fish steak. All were well cooked and seasoned.

As is common in Somali restaurants each entree is preceded by a complimentary bowl of soup. This is usually a mildly spiced meat based broth with vegetables. The soup at Ginevra was very good.

I don’t think a visit to Ginevra would be complete without the Somali chai which has a wonderful mix of ginger and cardamon. Our tea came in a teapot to share. I would also recommend the Ginevra special juice, an intriguing mix of dates and milk but quite delicious. 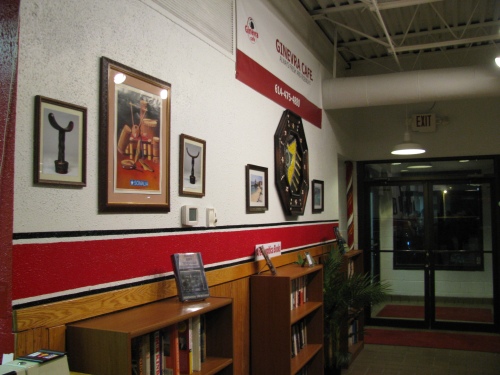 Service is friendly and Ginevra also has free wifi. Somali desserts and snacks (such as Sambusa) are available from the counter.

This entry was posted in African, Somali and tagged chai, gyro, mediterranean, Somali. Bookmark the permalink.