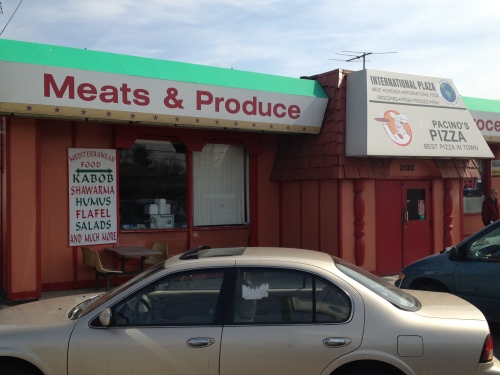 Janet’s Kitchen is tucked into the side of the International Plaza Market, and is run by Janet and her business partner Hishim (who previously cooked at the Happy Greek before starting this venture last year). The duo hail from Syria and Egypt, and offer a variety of Middle Eastern dishes ranging from standards such as shwarma and gyro to roast chicken and lamb shank. Falafel are freshly made to order and were among the best we’ve tried in town.

We were particularly taken by the kefta kebab which was notably juicy and flavorful. It can be ordered with rice and vegetables or as a pita sandwich.

As both the lamb shank and chicken are extremely tender, Janet tutted at us when we asked for a knife, finally handing us one even though she swore that we would not need it. She was right. Lamb, chicken and other daily specials (fish fillet or meatballs are two examples we have seen) come with a mountain of rice and sauteed vegetables. It makes for a hearty meal as well as a good value. The rice was exceptionally good and unique – we were very curious as to how it was made but Janet wasn’t giving away any secrets. We’re guessing butter had something to do with it.

There are also a variety of salads and cold dishes pictured below: tabbouleh, salad shirazi (cucumber and tomato), red cabbage salad and roasted eggplant. Most notable was the garlicky, tart, roasted eggplant.

Janet’s Kitchen has two or three tables set up to dine in but is primarily set up for take out.

The market has a butcher’s counter at the back of the store and a bulk dried goods section as well as a decent range of Middle Eastern packaged goods.

One response to “Janet’s Kitchen”