2o11 update: The truck formerly known as Las Catrachas is back with a new truck and a new name, but it’s the same delicious Honduran food cooked by the lovely Isolina with help from her daughter Angela. If you are curious about the new name Merendero is an outdoor kiosk and catracho means Honduran. We were excited to see them open again. New on the menu this year are pastelitos (empanada like pastries) made either with flour or cornmeal. Here’s the menu:

and here’s evidence that the food is just as good as always: the tajadas con pollo with guineo (fried chicken with green bananas, cabbage and picked onions)

For more information about the food – our 2010 post is below:

Note: Due to the ‘crossover’ nature of this particular food find (it’s a mobile food vendor – which is typically taco truck territory – but they’re selling some offerings that are entirely unlike anything we’ve covered yet on TTC), we are posting this write-up both here and on Taco Trucks Columbus.

We’re often asked just exactly why we do what we do here on this blog – it looks like a lot of work (partly true) and doesn’t pay (entirely true), so what gives? Our list of possible responses usually includes some or all of the following:

• We want people to be aware of the diversity of offerings in Columbus
• We enjoy learning about new cuisines and sharing our findings with others
• We like how the blog provides us with the motivation to expand our horizons and try new foods for ourselves
• We derive pleasure from the idea that our recommendations may help small business owners who have excellent (though perhaps unfamiliar) products to achieve much deserved success.

To this list, we have to add a new item:

• Pure unadulterated selfishness.  Put simply, we want to be able to return to places like Las Catrachas again and again.  Your patronage is requested for the purpose of keeping this new truck afloat through its infancy, thereby guaranteeing our continued, unfettered access.  So please, go to Las Catrachas.

Alright… so this isn’t your first rodeo, and I’m guessing you wanna know what’s in it for you before you sign on. Fair enough. To start, there’s Las Catracha’s Honduran interpretation of a pupusa:

Made to order, these brilliantly fresh cornmeal patties pleased like none we’ve had before, and were filled with a delicious mix of refried beans, mildly spiced chicken, and cheese.  The curtido (cabbage slaw) was bright and refreshing, and the thin red sauce had deep savory undertones with just a hint of spicy heat.

The baleada, a traditional Honduran snack, was similarly satisfying.  While very similar to a taco in form and concept, this dish distinguishes itself with a light, thick, soft cornmeal shell containing your choice of cheese & refried beans, scrambled eggs, or carnitas & beans.  We opted for the carnitas, and couldn’t have been happier.  As with the pupusa, each bite exudes an ineffable freshness.

As we were contentedly munching on the above, the main attraction came out.  Here’s where things get wonderfully weird:

This hot mess of a dish is called tajadas de guineo verde con pollo, or, in English, ‘french fried green bananas with chicken’. All of this was topped with pickled onions, cabbage, a sauce similar to the pupusa’s side sauce, and a rich, creamy dairy-based sauce.

Upon tasting, revelations abounded… and since we’re making lists today:

• The crispy french fried green bananas are way better than they might sound, don’t particularly taste strongly of banana, and were excellent when bathed in the mix of sauces that accumulated at the bottom of the plate.

•The chicken is fried, and very skillfully fried at that.  The included leg/thigh piece we sampled was, by itself, easily the best piece of fried chicken I’ve had in Columbus. A bold claim, perhaps, but I’m betting you’ll agree.

•This chicken was even better when smothered in the creamy sauce… I think I detected a hint of buttermilk in there.  Niiice.

•The whole strange motley mish mash of a plate adds up to one hell of a counterintuitively cohesive and spectacularly satisfying dish.

In fact, I’d wager that this dish has just the combination of oddball, inspired, and sublime that cult followings are made of.

Finally, we tried the pastelitos de carne molida – in essence a ground beef & potato empanada topped with cabbage, tomatoes, and pickled onions.  While carne molida translates roughly as ‘ground meat’, the meat in the pastelito seemed more like finely cubed beef.  No problems there, though, as the pastelito was fried to a pleasing crispness, the carne/potato mix had a nice flavorful spiciness, and the whole package struck us as resembling an endearing Central American interpretation of an Indian samosa.

Overall, our experience at Las Catrachas led all three of us to be infected with the kind of giddiness the food-obsessed get when challenged by the unfamiliar (who knew Hondurans ate fried chicken?  Who would’ve thought to put it on a plate of banana fries and cover it with all sorts of stuff?!) and made utterly content by it.

Please be aware that La Catrachas is only open from Friday through Sunday (though they suggested they might be open for Memorial Day Monday and perhaps some other holidays.)  Vegetarians might find some happiness if they’re inclined to be lenient with some of the minor ingredients in the beans and cornmeal preparations – we can’t confirm the use of lard, but the likelihood is there. The staff is very friendly, and happy to work through any language difficulties.

Just for kicks, a look at the tajadas de platanos verde con pollo (which we intend to try next time): 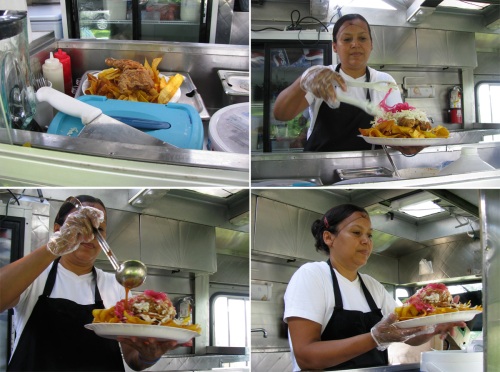 This entry was posted in Honduran, Mobile Food Vendor and tagged Honduran. Bookmark the permalink.