Cuisine: Japanese with myriad other influences

Driving around downtown on any weekday at lunchtime, you’ll inevitably see plenty of lunch carts.  Recognizable by their red & white umbrellas, they usually serve gyros, brats, hot dogs and the like… just as they did 5, 10, hell, even 15 years ago.

Almost lost amongst them today, though, was something completely outside of the norm.

Prior to visiting Foodie Cart, I had tried to talk several people into joining me in trying them out. Almost inevitably, the response was, “What is a Japanese crepe?!”, which seemed to indicate vague sense of distrust based upon the conflation of ‘Japanese’ with what is commonly considered to be a French preparation.

Odd though it might sound, crepes have long been a (delicious) part of the culinary landscape in Japan.  They’re distinguished from their continental cousins by a couple of traits – a thinner, somewhat crispy crepe shell that uses little to no butter, and a ‘the only rule is to break the rules’ approach to filling combinations. Well, that and the fact that they’re mostly found in Japan.

That’s where Misako Ohba comes in.  Trained as a pastry chef in Tokyo, she was recruited to ply her trade here in Columbus, where she met her husband and partner-in-crepes, Kenny.  Having paid their dues in the food service industry, they decided it was time to strike out on their own. 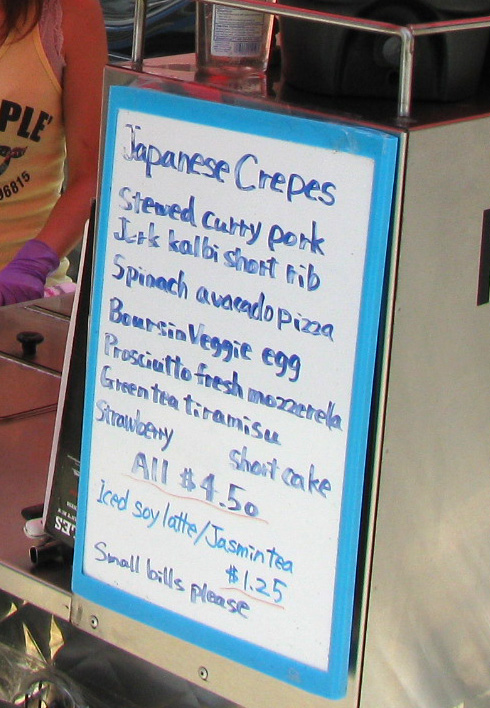 I’m emphatically glad they did, as this allowed us to try four of their crepes – the stewed curry pork, jerk kalbi short rib, Boursin veggie egg, and the green tea tiramisu.

All of the savory crepes were folded into a package not unlike that of a burrito.  The light and flaky exterior of the pork curry crepe (above) yielded to reveal nicely seasoned and tender pig flesh, shredded cabbage, and a few dabs of tabasco.  A beautiful combination, both in flavor and texture.

The jerk kalbi – strips of marinated short rib meat, spinach, and an unusual sauce that, if I recall correctly, included kiwifruit – was similarly successful. I’ve long loved the big beef taste of the traditional Korean kalbi preparation, and it’s been a dish that has translated well into myriad ‘fusion’ interpretations (it’s a mainstay of the famous Kogi ‘taco’ truck in LA).  So… hey, why not in a crepe? 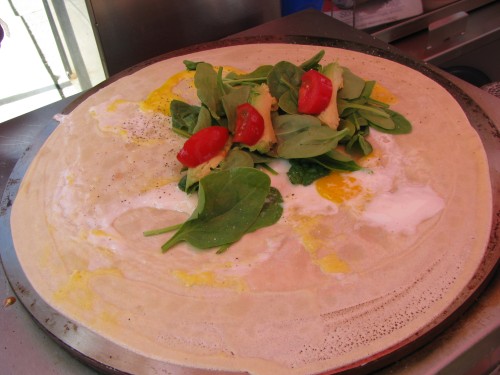 The last of our savory crepes was the Boursin, veggie, and egg (above), which included spinach, avocado and tomatoes.  Though the ingredients couldn’t be more different, this struck me as having qualities similar to that of a good banh mi sandwich in that it hits the palate as both rich and light/vegetal simultaneously.  Quite a trick to pull off, and an exceptional savory treat.

Did we mention that Misako is a pastry chef? She makes a complete green tea tiramisu, and then puts dollops of it into a crepe along with fresh strawberries and chocolate sauce. If that sounds good, know that it tasted better.

At this point, Foodie Cart’s menu changes quite frequently. Other items in the rotation include ahi tuna, salmon & avocado, and lemon pork belly… all of which will ensure our speedy return.  They’re also keen to include at least one vegetarian item on the menu at any given time.  Beverage options include iced jasmine tea and a soy iced tea latte, and both were great.

One last thought. Operations like Foodie Cart and Fusion Cafe represent the growth of something that is both important and special to our food scene – namely the emergence of seriously high-quality, innovative food that budding restauranteurs can only share with us thanks to this low investment approach. Mobile food also allows the small guy with big ideas the opportunity to take risks with their menu that most restaurants would shy away from, as well as serving as something of an incubator for the leap into restaurant ownership.

In short, guys like this are a big good thing, and I’d like to encourage our readership to frequent them.  Did I mention that Foodie Cart’s crepes cost all of $4.50?  Yeah, low overhead also means low prices.

This entry was posted in Japanese. Bookmark the permalink.