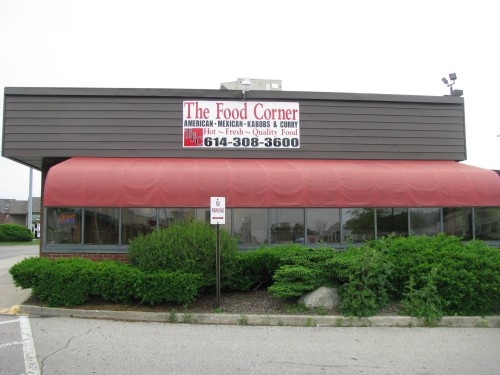 Cuisine: Indian (and Mexican and Greek and American and…)
60 N. Wilson Rd.

Anyone remember the Kentucky Taco Hut that used to be in the OSU campus area?

I think we found its indie cousin.  Much as you could leave KTH with a bucket of original crispy, a meat lovers pie, and a burrito supreme or two, at The Food Corner you can take your pick from a menu with such divergent items as quesadillas, fried bologna sandwiches, gyros and tandoori chicken.

We’d driven by The Food Corner on numerous occasions, and while we’ve gotten a chuckle out of the ‘American – Mexican – Kabobs & Curry’ sign, we can’t say it inspired us to try them.  It took an Indian gentleman’s suggestion (we bumped into him during a fruitless attempt at finding a rumored Filipino grocery on the west side) to nudge us into entering.

It’s clear this used to be a fast food restaurant – perhaps a Wendy’s?  At any rate, for such a conversion, it’s unusually clean and well sorted out, if maybe just a bit lacking in the charm department.  The process seems to be that you order at the counter, sit (your meal will be brought to you) and then return to the counter to pay. 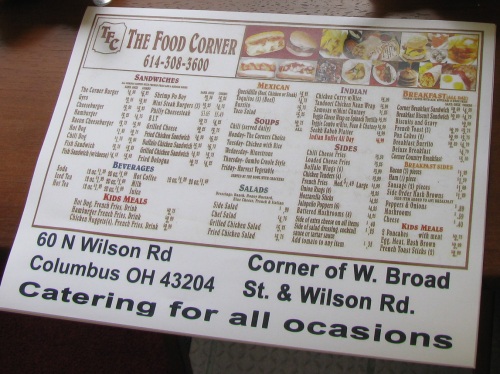 The menu (above) that shows the aforementioned motley mix o food is surprisingly extensive and almost comically wide-ranging, but it really just scratches the surface.  There is also an entirely separate full Indian menu – with, I kid you not, 102 additional items – as well as an Indian lunch buffet.  I don’t think we’ve ever seen a more ambitious range of items on offer anywhere.

Since the owners appeared to be of Indian origin and the recommendation came from an Indian man, we stuck to the Indian menu. 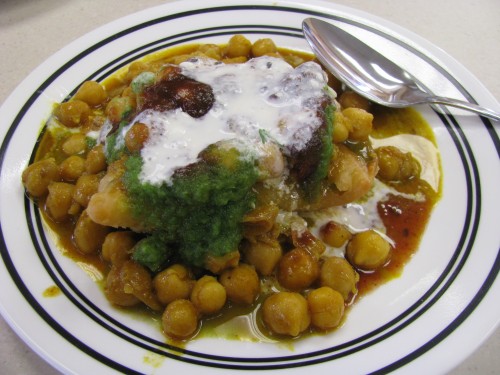 First up was the vegetable samosa, served chaat style – with chickpeas and a variety of sauces.  There were a lot of flavors playing well together in this dish, but the samosa itself struck us as being a bit on the chewy side.

Next came the ‘bread basket’ – a mix of naan, garlic naan, and aloo naan. All of these were enjoyable – particularly the aloo naan with its potato and onion filling – but they’re not quite up to the heavenly deliciousness of Mecca’s wonderful bread offering. 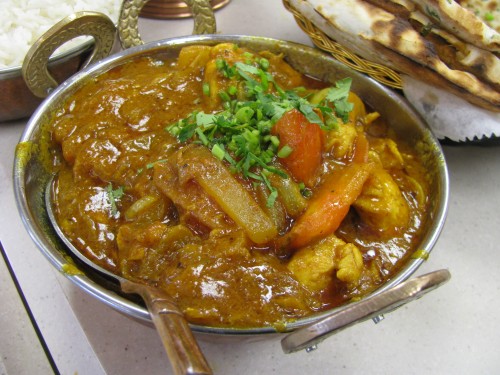 We have no idea what came out next.  We ordered an item off of a photo on the wall that is not on the take home menu we intended to rely on… and what came out most assuredly was not that item anyhow.  It was a chicken dish in a brown sauce, and was surprisingly bland by the standards of Indian cuisine.  The chicken was on the dry side. 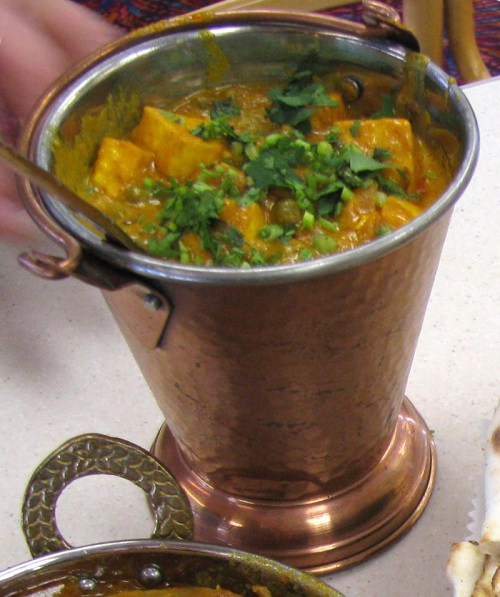 Last, but not least, was the mattar paneer… which, mercifully, was both as-ordered and on the menu.  The paneer – a light, rennet-free cheese – was as good as any I’ve ever had, and the sauce that came with it was enjoyable if curiously subdued.  This is but one of twenty vegetarian options available on the Indian menu.

The buffet (which went untried on this visit) seemed a good value at $6.99.

The Food Corner’s service was solid, and the owners were thoroughly kind and helpful.  Our recap of our experience isn’t entirely glowing, but it’s hard to suggest that that should mean anything when there was (due to the size of the menu) so much left untried. To that end, if any of our readers do try (or have tried) the place, we’d love to hear from you in the comments.

This entry was posted in Indian, Middle Eastern, Restaurant, Uncategorized. Bookmark the permalink.

20 responses to “The Food Corner”