Pho Saigon is the third Vietnamese restaurant in the Columbus Square area. Bearing that in mind, we were pleased to see that they were offering some well turned-out Vietnamese dishes that are not only unique to the immediate area, but to Columbus overall.  The restaurant may also hold the honor of being the longest and skinniest restaurant in Columbus – it’s little more than a sliver partitioned off from one side of the Asian Grocery. 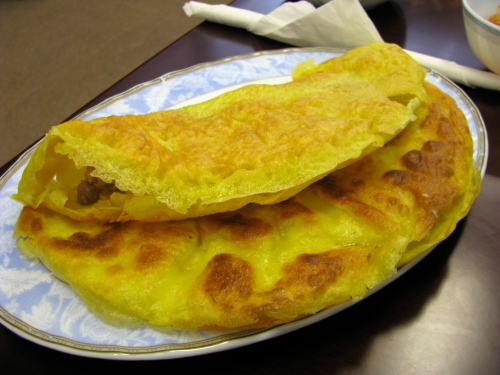 The first thing that caught our attention was the half moon cake (banh xeo – pronounced banh SAY-oh) probably better translated as half moon crepe. This is a crispy savory crepe made of rice flour and tinted with tumeric. Apparently the name means ‘sound crepe’ due to the noise the of batter hitting the hot pan. It is filled with pan fried shrimp, pork, onion and peeled mung beans. The crepe is served with a plate of lettuce leaves and herbs such as mint, basil and shiso and accompanied with a sweet and spicy dipping sauce (nuoc mam pha). To eat it you wrap pieces of the crepe in the lettuce leaves and add herbs and the dipping sauce to taste. I loved the flavor and texture combination.

The next unusual dish that caught our eye was chao long (porridge with pork organs). This Saigon specialty is a type of congee – a savory rice soup in which the rice is cooked until it achieves a porridge-like consistency. Pho Saigon’s version was very flavorful and we guessed that it was cooked with broth and not just water. It was topped with cubes of congealed blood, blood sausage, slices of tongue and slices of pork intestine and then garnished with thinly sliced scallions and finely ground black pepper. I promise that it tasted so much better than it sounds, and was actually very comforting. If offal isn’t your thing, you can also order it with duck or chicken. Chao long is served with pieces of light, crispy deep-fried croutons, bean sprouts, and lime wedges.

We also ordered the bun bo hue (Hue style beef noodle soup) which we loved. This beef soup is actually made with pork as well as beef. The broth is seasoned with lemongrass, shrimp sauce and chili, but the heat was fairly mild (you could add more). It was topped with slices of onion and cilantro but came accompanied by a plate of finely sliced banana flowers, sliced water spinach stalks, lime wedges and Thai basil.

Although the market is well established, Saigon Pho opened very recently and the menu is fairly limited. We were very pleased with what we tasted so far. Other menu items are: