When a place looks like this, and has great food, we’re all  kinds of happy: 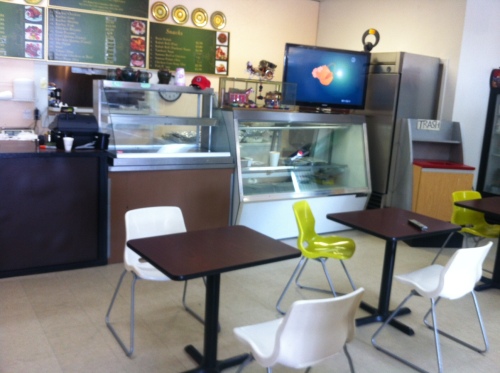 That said, we understand that perhaps not everyone feels similarly. However, when you take the same great food and serve it in a setting like this:

…that should make everyone happy!

So here’s the story – when the space next to Apna Bazaar opened up, Apna’s owners pounced on it. They gave it the pictured makeover, named it Tandoori Grill, and evolved from functioning as a simple takeout counter to providing a true, full service, sit-down experience.

Tandoori Grill (and Apna – the takeout counter is still open) specializes in Pakistani cuisine, with an emphasis on tandoori-grilled protein preparations. If you’re familiar with northern Indian cuisine (most Indian served in Columbus is essentially northern Indian in inspiration), this should be comfortable territory for you.

Especially if you start with their tandoori chicken platter. The dish exhibits all of the traits one would expect from the style of preparation, but raises it to a level otherwise unfound in town. The char is restrained but present,  the marinade penetrates deeply and has a brightness and complexity of flavor that’s in a league of its own, and the tenderness is second to none. 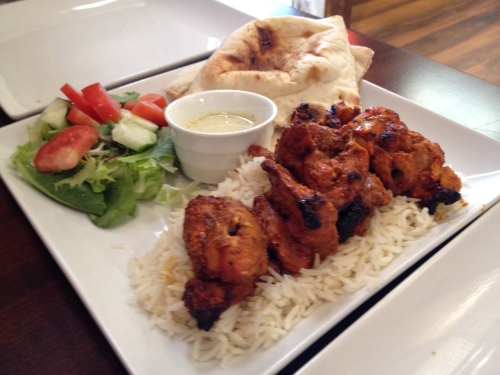 It would’ve been the hit of the meal, were it not for the tandoori kabob karahi. This dish, made of ground chicken kefta-like kebabs that have been grilled, sliced, and tossed in a tomato based masala sauce,  had our table of 4 fighting over the scraps. It’s a bit on the spicy side, and a wonderfully complex melding of flavors and textures.

On a previous visit we tried the fish karahi, and found it similarly appealing. The kitchen took obvious care in not overcooking it, and the distinct flavor and texture of the fish made for a dish that differentiated itself significantly from its karahi-sauced compadre.

Our meal began with crispy, flaky samosa, one filled with a minced chicken mix, the other with a potato mix. Both were enjoyed, with our nod going to the chicken version. 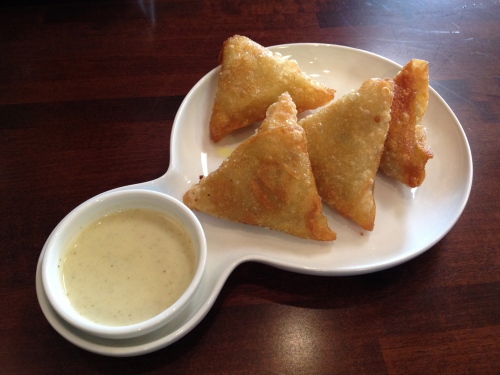 Rarely have we had such a satisfying meal and yet left feeling like there’s so much more to try, but we’re big fans of dishes such as pakora, tikka masalas, kormas, and seekh kabobs, and eagerly look forward to the chance to taste them.

Especially since we’re relieved to report that food at Tandoori Grill is every bit as good as Apna’s has been. Service has been on the ball on both of our visits, making for a complete and completely pleasant experience.

Read more about Apna Bazaar and some of their other dishes here.