Early in 2013 we read that Luce had a new Japanese owner and was being rebranded as Luce Nuovo. More recently, they’ve cordoned off a section of their restaurant (including a separate entrance) to open Menya Noodle House, a weekend-only ramen shop that debuted this weekend.

Menya offers three ramen broths – shoyu, miso and tonkotsu. The miso had already sold out, so shoyu and tonkotsu it was for our group of 3. We unanimously prefered the tonkotsu (pork bone broth, pictured below). Nice and rich and meaty, we thought it to likely be the best tonkotsu broth in the city. The shoyu, by contrast, struck us as fairly average. 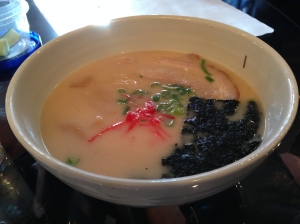 The pork belly topping was sliced into long bacon-like strips. It was tender but otherwise indistinct, and a more traditional chashu would have been preferable. You can order extra seaweed, egg or pork belly toppings, though they were out of eggs on this visit. Both the ramens that we sampled were served with thin ramen noodles.

There is a small selection of appetizers, including cold tofu with ginger and bonito (best eaten with the provided soy sauce) , edamame, and several rice dishes. 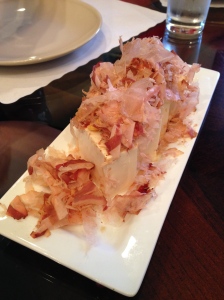 You can also order from Luce’s Italian offerings, printed on the back of the Japanese menu.

For more on ramen in Columbus check out our article for Columbus Crave.

It’s no secret that, in the US, we tend to twist the cuisines of other cultures around to suit our tastes, often to such a degree that that they end up bearing a questionable resemblance to their origins. On occasion, I’ve wondered what a Japanese person must think when encountering cream cheese in a sushi roll, or a Chinese person might think of General Tso’s chicken.

If I had to guess, it’s probably something similar to how I felt while perusing the wares at Belle’s Bread, a pastry shop and cafe geared towards the local Japanese population. From cod roe spaghetti to curry donuts to mac & cheese ‘gratin’ spiked with shrimp and served in a bread bowl, Belle’s is a quick trip to a European/American culinary uncanny valley.

Belle’s scrupulously tidy and immaculately clean interior suggests a vague French theme as filtered through a Panera lens. All staff are spiffily dressed in pressed white shirts and – I kid you not – berets, and are impeccably polite. Baked goods are wrapped individually and proudly displayed, while jewel-like single-serving desserts glisten and tempt from behind the glass of a long row of refrigerated cases.

The delightfully bizarre selection in the bakery section overwhelms with options, the first of which is – sweet or savory? As in, a pistachio tart, or the one with the hot dog in it that looks like it has a ketchup drizzle? Chocolate eclair, or a donut filled with chicken curry (picture below)?

Almost regardless of your pick, you’ll encounter an extremely light and fluffy white bread-like pastry base that has very little flavor of its own. We’re told this is a Japanese preference, and as such it leans heavily on the fillings, toppings, and the like to carry the experience. This can be pleasant on its own merits, but one can’t help but imagine the reaction of a Parisian to the sacrilege of patisserie-perfect appearing goods sporting the base texture and flavor of Wonderbread. One notable exception was the danishes, in particular the pear-custard version – the pastry was delicious and the custard sublime.

Moving on to the savory dishes, the curiosities fail to abate. The Neapolitan spaghetti was a reasonably enjoyable bowl of noodles and red sauce, though the hotdog slivers within added little beyond question marks. The smoked salmon sandwich was absolutely gorgeous in a scaled up British tea snack sort of way and featured a clever use of avocado, but the salmon flavor was strangely muted. The aforementioned gratin was essentially mac & cheese, light on the cheese though rich and creamy in the extreme and dotted with bits of shrimp. It’s offered in a bread bowl, just in case you need the extra carbs.

Perhaps most intriguing was the Japanese spin on beef bourguignon called hayashi rice – tender beef, mushrooms, and onions smothered in a rich wine sauce served alongside rice. Rich, savory, and emphatically comfort-foody, this dish – essentially a stew – speaks directly to the Midwestern soul.

The single-serving desserts struck sweet chords left and right among our table of tasters, with the chocolate mousse cake garnering unanimous praise and the impossibly light and powerfully mango-ey mango mousse finding fans among the mango lovers. The fig tart was also well received.

And then there’s the soft-serve green tea-flavored ice cream, and the self-serve yakisoba noodle sandwiches, and… well, I could go on, but won’t. If you have an open mind to novel twists on familiar favorites, check Belle’s out.