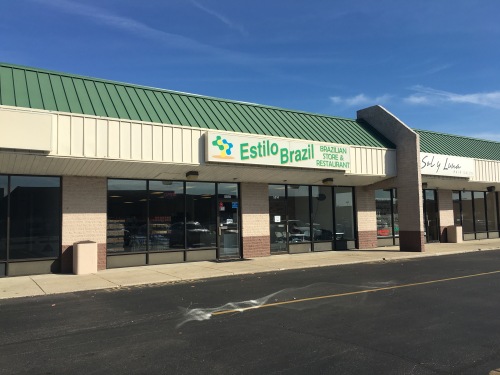 Cuisine: Brazilian
5818 Columbus Square, Columbus, OH 43231
(614) 269-8990
Open Monday-Saturday
The last time we visited Estilo Brazil at it’s old location on Cleveland Ave., we were charmed by the flavors of the cuisine and the tropical vibe of their small side patio. We also could clearly see that the tiny back-of-the-market space just wasn’t up to the task of producing much food or accommodating many guests… especially in Central Ohio’s temepramental climate.

With the opening of their new, larger Columbus Square location, the seating’s better, the menu’s expanded, and the concept is clearer – alongside the bright, clean market sits a Brazilian PF, or ‘prato feito’, a popular traditional style of Brazilian dining.

PF is described as the working man’s meal, and as such we’d say that the working man has it pretty well off. The fundamentals are straightforward – beans, rice, a starch or two (usually fries), salad (potato or lettuce), and a rotating roster of proteins. For us, the proteins are what makes the concept shine.

Currently, two options are consistent – the linguica calabrese and picanha. The linguica, a spiced pork sausage reminiscent of a Filipino longaniza sans sweetness, makes for a pleasant and generously portioned accompaniment to the beans and rice, but the picanha, strips of beef sirloin rump cap, steals the show. Picanha is sliced so that each strip features a small knob of gristle-free fat at one end, and cut against the grain so that a reasonable degree of tenderness compliments the deeply beefy flavor of the cut. First timers can opt for half longaniza and half picanha, which makes for a good overview. 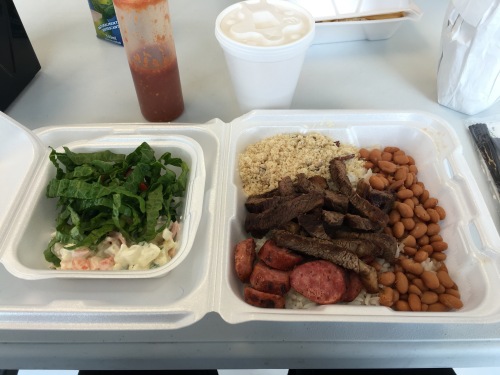 A rotating third meat option is also available, and as of both visits it was described as a Brazilian version of a chicken stroganoff. Tempting though it was, the picanha and linguica won out for us both times.

Ordering is simple as the entire operation is structured as a cafeteria line. Once you’re at the beginning, lids come off of all of the food and it’s as easy as pointing to what you want. With small quantities of food being staged, the kitchen seemed busy with preparing refills for the steam table and as such freshness was consistently high.

One of the consistent sides is Paçoca de pilão, dried beef that is mixed with toasted cassava flour and ground until very fine. 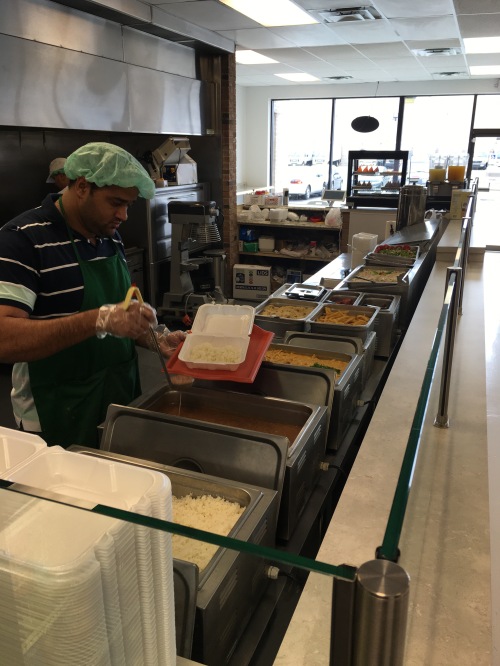 All of the dishes we tried were almost entirely devoid of spicy heat, but the remedy awaits, should you desire it, in the form of a variety of bottles of hot sauces on the counter. Beverages are limited to cashew fruit and passion fruit juice, though a wide selection of bottled and canned drinks are available in the market.

Portions are generous, and a run through the line will set you back $11, which strikes us as a bargain. In the context of Columbus Square offerings, Estilo Brazil may not feature the most exotic or adventurous range of flavors, but it’ll undoubtedly provide a damned good square meal at a reasonable price. 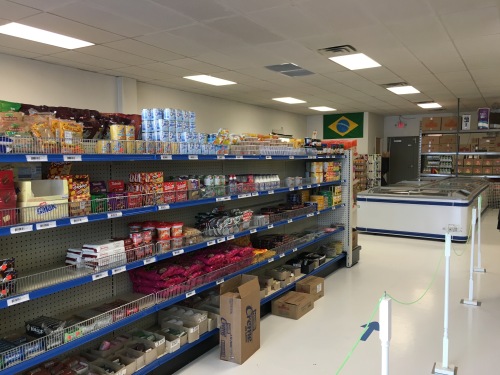 This entry was posted in Brazilian, Grocery store, Restaurant. Bookmark the permalink.

One response to “Estilo Brazil”