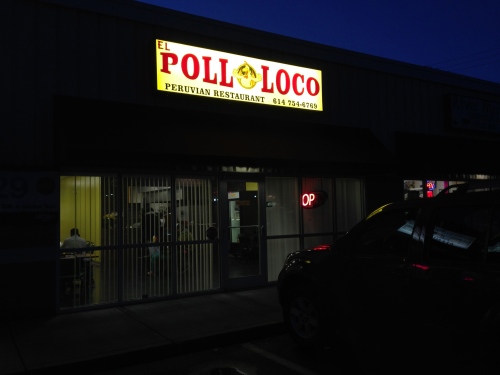 El Pollo Loco is a new – as in, opened yesterday (10/19/13) – Peruvian restaurant on the west side specializing in Peruvian charcoal-grilled rotisserie chicken or pollo a la brasa. If you had been to the late, lamented Fito’s on campus, you’ve almost certainly had a very similar style of chicken. Word to the wise – if you liked it there, you’ll almost certainly love it here.

The menu lists a wide range of options, but upon opening the chicken was just about all that was on offer, at least as far as entrees go. We did try an order of the salchipapas (french fries with thinly sliced hotdogs), and the papas a la huancayna (cold boiled potato slices in a creamy garlic sauce). Both are pleasant enough, though far from a reason to make a special trip.

The special trip-worthiness comes from the chicken, which is incredibly moist and tender and wonderfully seasoned.

El Pollo Loco also features a selection of Latin American sodas, including Inka Kola and Kola Inglesa, as well as some house-made beverages. The chicha morada, described as a purple corn drink, was particularly pleasant and had an interesting fruity, cinnamon flavor.

This entry was posted in Latin American, Peruvian, Uncategorized. Bookmark the permalink.

One response to “El Pollo Loco”