We write up, on average, only one out of every four restaurants we try. Simply put, our goal is to tell you about the good in what’s out there. If we’re unable to find something we’d feel compelled to share with a friend, we’re not likely to share it here.

Even with that batting average established, we’ve had a particularly rough streak this summer (as you may have guessed by the frequency of our posts).  And, many of these unwritten experiences came from new restaurants serving some variation or another of Southeast Asian cuisine. We’ve had “pad thai” served as spaghetti noodles pan fried in what tasted of nothing more than soy sauce, eye poppingly gorgeous Vietnamese presentations almost completely devoid of any recognizable Asian (or other) flavors, and been presented with menus with dishes numbering in the hundreds… each more insipid than the last.

I suspect much of this comes from a desire to please the American palate – to reinvent Thai or Vietnamese as the Chinese have successfully done with their cuisine – and is attempted under the assumption that this is easily achievable.

What is working is Siem Reap – an unassuming new Cambodian/Thai restaurant found in the shadows of the new casino, and named after a town in Cambodia situated next to a far more impressive edifice.  After a season of kissing frogs, this restaurant is sweet sweet redemption.

Our first clue to the goodness to come was the menu – not so much the items themselves, but more that the relatively modest number of items listed indicated that they weren’t trying to be everything to everyone.

Our next clue was the lagniappe – a small salad of pickled carrots, daikon, and green papaya garnished with roasted peanuts. A simple dish, and a perfect flavor combo to set the tone for the evening.

Sitting proudly atop the appetizers list were the stuffed chicken wings – a new concept to me, and one that I’m more than glad to be acquainted with. Four plump wings arrived, deboned and stuffed with what amounted to a spicy, lemongrass inflected chicken sausage threaded with glass noodles.  Juicy, complexly flavored, and sizable, each of the six at our table deemed these absolutely brilliant.  We ordered seconds. You want these, preferably now. 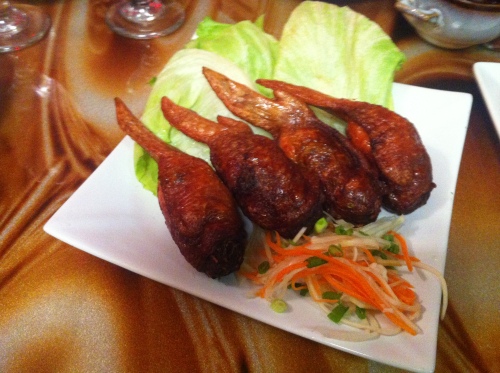 The beef skewers were far from the typical, anemic satay chew toys. These were actually very good, with the subtle marinade allowing the exceptional flavor of the conspicuously high quality beef to shine through. Add on the skillfully controlled char, and we were left wondering if we’d been temporarily transported to Fresh Street. 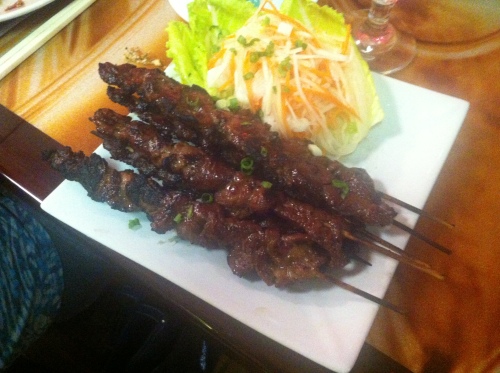 The larb – a cold minced chicken salad marinated in a lime sauce – was pleasant enough on its own merits, but didn’t have the bright citrusy punch of the (to me) preferable Thai preparation.

Our selection of mains was strongly influenced by the cold weather, which led us to rice soup and the curry ‘fondue’ hot pot. The rice soup was a pleasant, vaguely congee-like concoction served in a rich and somewhat sweet broth with pho-like sides of herbs, lime wedges, and bean sprouts. Chinese-style savory crullers were also provided, and cubes of pigs blood were an option. 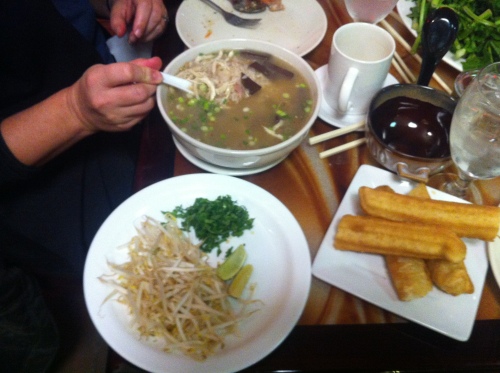 Nothing could’ve prepared us for the hot pot – essentially a simmering curry broth in which you cook food from the astounding piles presented with it. We’ll let the photos do the talking here: 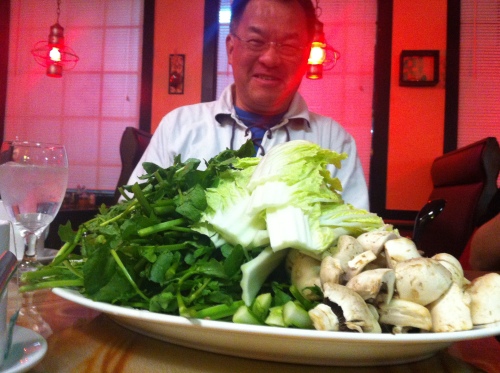 The whole shebang: veggies, proteins, and the simmering curry broth

If the photos don’t convey it adequately, let me be clear: this almost certainly would’ve been enough to feed all six of us; we actually had leftovers enough to feed two.

It also impressed us, once again, with the freshness and quality of the raw ingredients. The broth, an exceptionally mild curry liberally dosed with fish sauce,  seemed the perfect seasoning for everything… save, perhaps oddly, for the beef.

Vegetables were scooped in, squid and shrimp bathed, and beef quickly swished around. We were instructed that the pork rinds – an intriguing inclusion – were to be soaked until soft. That took some time, but was well worth it as the flavor was exceptional.

We finished with two fine, if unexciting desserts (to be fair we might’ve thought better of them were we not so stuffed…) – sesame balls with yellow bean paste a coconut/rice jello dish. 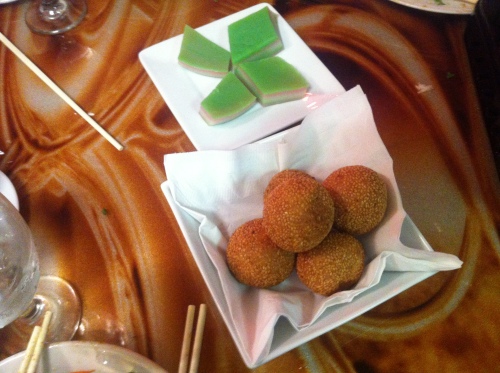 So, to wrap up: 6 people ate staggering quantities of thoroughly enjoyed food, and paid $75 in total for all of it. Service was pleasant, knowledgable, and prompt. The space was clean and pleasant.

In it’s west side environs, Siem Reap is nothing less than an oasis in a culinary desert (mobile food excepted, of course). Do check them out.

This entry was posted in cambodian. Bookmark the permalink.