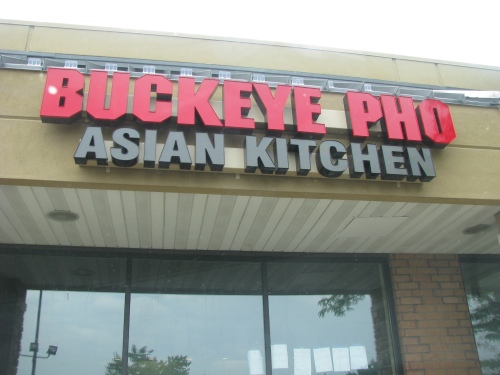 Buckeye Pho is one hell of an interesting experiment.

As the name might suggest, the interest comes from how they wed an ethnic cuisine (in this case Vietnamese) to resolutely Ohio-centric branding. A few have gone down this path before – the ill-fated Buckeye Sambusa, to name one – but none have committed to the concept so completely.
And by commitment, I mean investment. Few new independent restaurants in recent memory have debuted with such a bright and shiny interior space, and I can’t think of any (true) ethnic restaurants in town that can boast of such refinement. A brilliant glossy stainless-steel kitchen gleams from behind a glass-tile-clad kitchen bar counter. Three large flat-screen TVs above the kitchen show a mix of news and sports. Rich red wood tables gleam with multiple coats of lacquer. Earth tones and OSU crimson adorn the walls, as does a stripe comprised of hundreds of real buckeyes. We were seated by a tie-wearing host, and the rest of the front-of-house staff wore customized black Buckeye Pho polo shirts. Kitchen staff wore strictly chef’s whites.
The effect, in sum, is that of a small localized Champps – not a whiff of ‘ethnic hole in the wall’ vibe anywhere and nothing so much as a nod to the culture that spawned the cuisine. 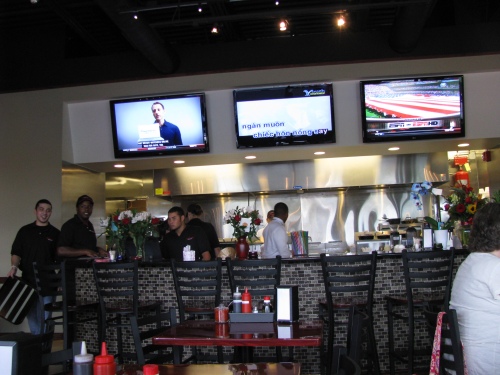 At least until one opens the menu. As we waited for our food, we felt a gaze upon us. A group of six men, by appearance probably construction workers, peered in through the window… and apparently liked what they saw. They entered and were seated next to us, and began perusing the menu. We’re not above listening in and observing, and what we heard and saw was puzzlement. The server walked them through their options, they ordered, and cracked self-depricating jokes regarding their cluelessness about ‘Oriental food’. Their food came, they ate, they seemed to enjoy.
This is clearly the idea behind the place – to entice those who are unlikely to try Vietnamese to feel as comfortable as possible in doing so. Like I said, a bold play… and one that might just work.
And it’s a worthwhile introduction to make, as Buckeye Pho’s owners are related to the owner of Mi Li Cafe. It shows in the food – the banh mi rolls have the same satisfying crunch, and the pho comes with a similarly rich and satisfying broth. This is true, unadulterated Vietnamese cuisine done well. 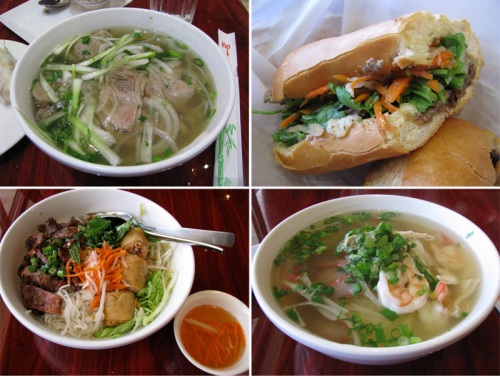 Pictured (clockwise from top left): signature pho; grilled beef banh mi (Vietnamese sub); Saigon soup (wonton like chicken broth with shrimp, crab sticks, chicken, chicken liver and roast duck) and bun thit nuong cha gio (vermicelli with grilled pork and spring rolls).
Interestingly, on a strip that has long been known for its many Asian restaurants, this is the first Vietnamese Restaurant on Bethel Rd. It makes the strip all the more compelling as a destination. If you’re into pho and the like, Buckeye Pho is a great new option. If you’re saddled with ‘that one friend’ whose lack of adventurousness limits your dining options, tell ’em you’d like to try out ‘a new restaurant’ and take ’em here. They won’t know what’s you’ve done until it’s too late, and they might just like it.
In spite of the spiffy atmosphere, prices are entirely reasonable. Apps start at $3.00, banh mi sandwiches run from $5.00 to $6.00, and larger dishes range from $4.50 – $10.50. Vegetarians will likely have a tough time here.

This entry was posted in Vietnamese and tagged banh mi, pho. Bookmark the permalink.