With a name like ‘Erawan’, it has to be good. Or so went our thinking – Erawan is the name of a minor shrine in Bangkok, Thailand, and to saddle a restaurant with what amounts to a near-unpronounceable name for english speakers that relates to an almost unknown location to anyone outside of Thailand is to show a genuine fidelity to origin. We couldn’t help but expect that that would manifest itself in the food.

This sense was confirmed when our thoroughly accommodating and knowledgeable server suggested that our meals would be best accompanied by sticky rice – a glutinous rice that is indeed sticky, with larger grains and a slightly nuttier flavor. Thais, particularly in the northern region of Isaan, use it much like Ethiopians use injera bread – in lieu of utensils, they grab a ball of it and use it to pinch morsels from dishes.  You don’t see this option very often around here.

The Isaan influence makes sense – Erawan is run by a Thai and a Lao, and Lao cooking is often very similar to Isaan style cuisine. And, as Laos is also influenced by neighboring Vietnam, you’ll also find pho here (which, if Yelp reviews are anything to go by, is supposed to be quite good).

But, we came for Thai, and Thai is what we had. Here’s how it went down: 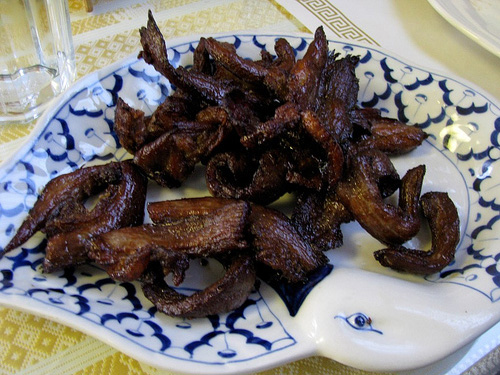 First we tried the beef jerky appetizer. We’ve eaten this at Thai restaurants on numerous occasions previously, been a bit confused by the name (it doesn’t seem like jerky!), and finally on this visit got some answers from our server: it’s a marinated beef that has been left to rest and drain for around 3 hours and then deep-fried. So, not jerky as we know it, and certainly not health food, but absolutely delicious with a bit of sweetness, strong lemongrass notes, a slight crispness, and an overt beefy flavor. It was gone in no time flat.

Next came the papaya salad with salty crab. We asked for maximum spicy heat (which is the norm for this dish), and we got it. We also got crunchy shredded green papaya in a citrusy sauce with deep fish sauce flavor, studded with peanuts, garlic, bits of crab, and intimidatingly large flecks of chili. We enjoyed it very much, were impressed by the authenticity, and I’ll just end this sentence by observing that the fish sauce is both potent in aroma and flavor and therefore may not be everyone’s cup of tea. But make no mistake, you’re getting the real deal here.

The yum nuea arrived next. Essentially a cold beef salad with a sauce similar to the papaya salad, it demonstrated the wide range of flavors – sweet, salty, and sour – that the dish is known for. Unfortunately, the beef itself was surprisingly gristly. Perhaps a bit too authentic in that respect?

As we dug into the pad gar pow, the first person to speak simply said, “oh, yeah.” At Erawan the choice of protein is yours, and we ordered ours with ground pork, which was completed with plenty of sweet basil, chili, and garlic sauce. Again, the execution was dead-on, and thoroughly enjoyed.  This is one of the big flavored Thai dishes that is easily accessible even in its most unadulterated form.

Finally, we tried the pad see ew, which was… incongruously odd, both for better and worse. On the plus side, it had a deeply meaty flavor that, while distinctly unlike any other pad see ew we’ve tried, was nonetheless roundly enjoyed on its own merits. On the down side, the noodles were overcooked and yet lacked the dish’s signature ‘essence of pan’ (the sootiness that comes from residual bits of prior dishes).

But never mind that last dish. We’re excited about this place, and can’t wait to try more. As Erawan has just recently opened, the occasional misstep is understandable. Prices were very reasonable, with apps ranging from $3.25 – $7.00, and meals from $7.00 – $13.00 (with most under $10.00). Service was exceptional.