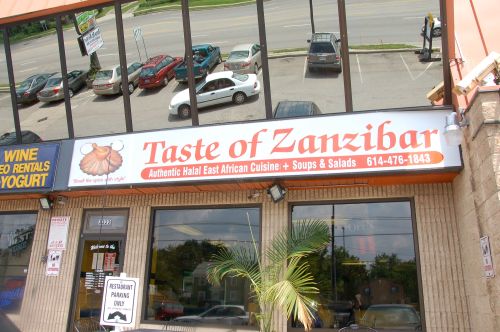 Telly, the owner and operator of Taste of Zanzibar, is not too shy to tell the details of her journey from Tanzania to Columbus. Schooling in France, years in New York and a stint with the United Nations all preceded her current life as a restaurateur on Morse Road. Ask her a question and she’ll happily answer, in detail, with a beautiful smile. But try to capture that smile — perhaps the best item on the menu at Taste of Zanzibar — and be prepared to be shooed away. She’d much rather her food and restaurant be in the spotlight, and, luckily, both are deserving of the attention.

Having spent a short amount of time (literally three days) on Zanzibar Island a few summers back, I was eager to try the cuisine, to jog my memories of that weekend trip a ferry’s ride away from Dar es Salaam. The food at Taste of Zanzibar is rich with spices, an homage to its origin’s nickname: the Spice Island. But true to my memories, nothing is too spicy or strange. Even the least adventurous diner would find the menu easy to take in.

I present the beef sambusa. The problem with the sambusa is that I always want two or three, taking away my appetite for the rest of the food I’ve ordered. (The first time I stopped at Taste of Zanzibar, I pretended like I was taking a carryout order for my roommate and I, and not just ordering two entrees for myself. The second time, I just admitted to Telly that I wanted all the food.) The good thing about the sambusa? It’s only a dollar.

There are two combo options — both with several dishes — allowing the indecisive eater the chance to try several things at once. Pictured above are chicken curry (with a wonderfully mild coconut milk based sauce), mchicha (chopped spinach with coconut) andchapati.

Next up, fish with coconut curry sauce and ugali with beans. Ugaliis a malleable combination of cornmeal and water. Used as a spoon, it, along with beans, is a staple in the Tanzanian diet. I ordered it more for memory’s sake than for its taste. Next time, I’ll have one less dish to vie for my attention. Ever aware of her customers’ expectations, Telly warned me that the fish had bones in it before I solidified my order. That curry sauce more than made up for any inconvenience caused by bones.

Once I knew that a photograph of her face was off limits, I asked if I could at least get some shots of her in the kitchen, working with her hands. The recipe for chapati is simple, and I’ve tried it many times at home, but I’ve never been able to make it like a pro. So I was excited that she agreed to demonstrate her technique.

Working the dough into a rosebud is the key to a good chapati, I learned. It’s all in the twist of the wrist.

A flight to Tanzania cost as much as my first car ($2400 for a 1987 Chevy Cavalier). It’s a relief to know that if I feel like stepping into a new culture for an hour or so, I don’t need a transcontinental flight to enjoy the food and hospitality of the spice island; a short drive down Morse Road is all it takes. Stop by for the food and say hello to Telly. Just don’t try to take her picture.

This entry was posted in African, Tanzanian and tagged Taste of Zanzibar. Bookmark the permalink.

9 responses to “Taste of Zanzibar”