Having driven past Calanley quite a few times, we’ve always felt a vague sense of unease about the place based upon its exterior appearance – there’s just something foreboding about the windowless building.

This unease appeared to be mutual, at least at first – it seemed as though Calanley may have never served non-Somalis prior to our visit. We definitely sensed a bit of anxiousness initially.

Especially from the poor man at the counter… our presence seemed to completely blindside him. His job was to take our order, and he seemed frustrated by, at minimum, our shared inability to bridge the language divide.

Thankfully, frustration led to resourcefulness.  He tapped an English-speaking Somali customer for assistance, and called on an English speaking employee from the kitchen. With their help, everything came into focus.

Turns out that Calanley is primarily frequented by regulars – unsurprisingly, almost all Somali. These customers know the offering (and the language), so there is little use for a menu. An out-of-date English-language menu was searched for and found, though, and after a few tries we managed to select items off of it that were still currently being served. 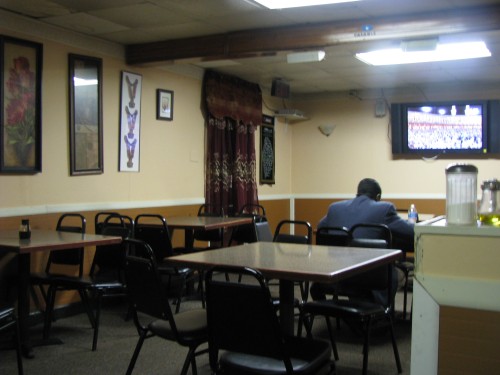 Calanley’s interior is basic, and the ambience was based largely around a television playing what appeared to be recordings of prayer ceremonies during the hajj.  This led us to recall that there was a separate exterior entrance for ‘families and ladies’ that opened into another smaller (closed off) dining room… we wondered if our female dining companion’s presence in the larger dining room might be causing distress.  We concluded that it probably wasn’t, at least if the remainder of our time there was any indication. 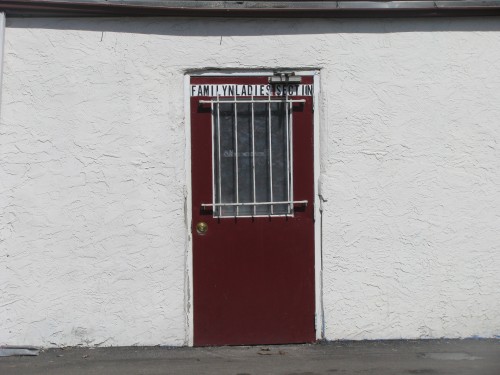 Our meals arrived quickly, and as seems to be the norm with Somali restaurants, portions were generous.  We tried the ‘chicken steak’ with rice first. This was very similar to African Paradise’s chicken preparation, which is to say it was cut into strips and similar to an Indian tandoori mixed with sauteed onions.  Roundly enjoyed. 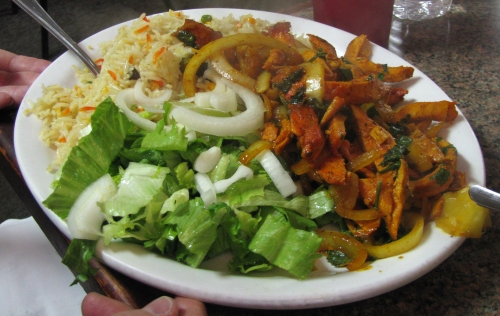 Next, the KK.  In some of our early research, we came across a thread on a Somali web forum that discussed Somali food/restaurants in Columbus.  In it, Calanley was widely thought to be *the* place for KK.  Underneath the lettuce was kimis (thin strips of flat bread) and kalankaal (seasoned cubed beef) mixed together in a thick, tomatoey sauce. We found it to be enjoyable, but perhaps a bit less so than the chicken. 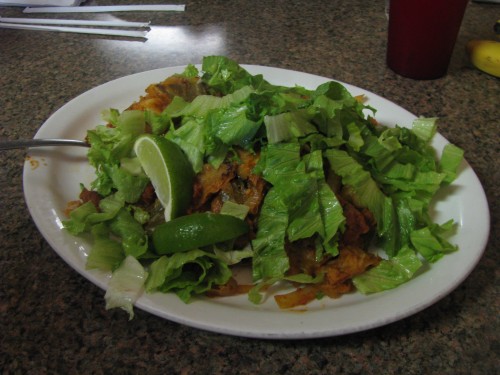 Finally, we tried the anjera with beef stew.  This was quite a spread – stew, salad, a wickedly spicy hot sauce, and a hard boiled egg, all atop a massive piece of anjera (also known as injera, a spongy Ethiopian flat bread).  The anjera seemed a bit on the mushy side, and the stew was fine if unexceptional… we probably wouldn’t build a return trip around it. 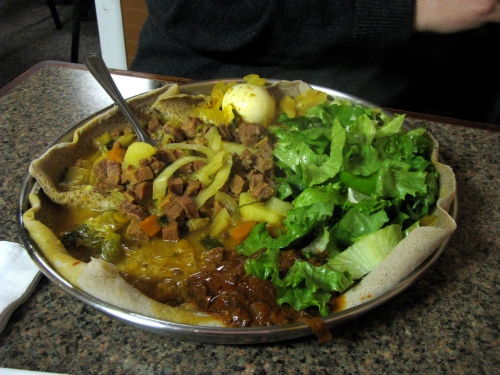 While we walked in to an atmosphere of concern at Calanley, we left to smiles.  We liked the place, and appreciated the efforts they went to in accommodating us.  Once we were able to express our interest in their food, everything else fell into place.  Suffice it to say that any cultural observations above (as with all cultural observations on this blog) are recounted solely for the purpose of providing practical insights for the uninitiated.

We were unable to evaluate the vegetarian friendliness of the offering due to the menu situation, but all dishes discussed contained meat, as seems to be the case with Somali cuisine more generally.  There was nothing posted to indicate halal preparations, but we’d wager it probably all is.

This entry was posted in African, Somali and tagged kk, Somali, somalia, somalian. Bookmark the permalink.