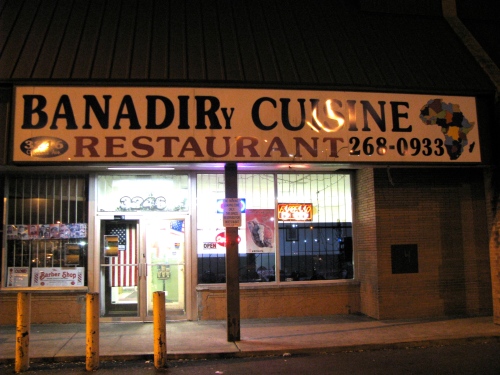 Subtitle: In Which We Learn About The Proper Time Of Day To Go Out For African Food

We entered the well-worn dining room of Banadir Cuisine to warm welcomes from the staff, and were promptly shown to our table. Baskets with utensils, napkins and complimentary bananas arrived with the menus.

The menus, here as in every other African restaurant we’ve been to, are notable for their bias towards lunchtime – that is to say, the lunch selection is usually 3-4 times larger than that of the dinner menu. A lot of the lunch items sounded awfully good, but so it goes… it’s dinner, we’re here, and we’re hungry.

We ordered the fish steak, beef steak, and the chicken suqar.  All of the dishes came with the option of jabati, rice, or spaghetti, and when we asked for jabati with the chicken suqar, our server offered to have it cut into slices and mixed it in with the dish, ‘K’ style.  Why not?

We also ordered tea (served with or without milk) and were given soup as part of the dinner order.  The tea, when ordered with milk, was chai flavored – similar to African Paradise’s offering but (mercifully) less aggressively sweetened.  The soup, ostensibly vegetable but flecked with goat meat, looked innocent enough, but was surprisingly rich and meaty tasting – these guys know how to make a mean (apparently goat based) soup stock.

Upon finishing the soup, our mains arrived.  Opting for ‘K’ style on the chicken suqar turned out to be a good move – the suqar struck us as something of a halfway point between a curry and a stir fry, and the jabati bread strips were dense enough to hold their own in the mix, both absorbing the sauce and presumably thickening it.  An unqualified hit with all who tried it.

The beef steak was less well received.  Flavor was nice, with a significant pepper hit, but the consistency of the beef led to murmurings about truck-stop jerky.  It’s possible that the chewiness of the preparation is traditional, but we’re still left wondering how it’d be if the beef were more tender.

Finally, the fish steak.  This was four or so reasonably sized pieces of salmon with a heavily spiced char crust, topped with a mix of vegetables and french-fry-cut potatoes. Slices of lime and a small salad garnished. The flavors of this dish were roundly appreciated, though there was some discussion about the oiliness.

Sated, I walked up to the cash register to pay.  While doing so, I asked the owner about the reasoning behind offering so many more items for lunch.

‘Simple’, he responded (and I paraphrase), ‘Africans, in Africa, traditionally work until about 2:00-3:00pm, and then have the main meal of the day.  This generally translates into lunch for Africans in the US.  What we call dinner here is a minor meal for most Africans. Usually Americans eat dinner here.’

Our next stop for African cuisine will be the Calanley Restaurant.  For lunch.

One response to “Banadir Cuisine”