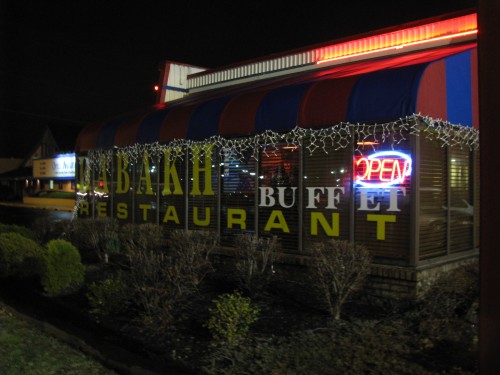 We had no idea that Columbus had a Senegalese restaurant – not from our research (which deemed it, somewhat generically, a ‘West African’ restaurant), and not from Dabakh’s exterior signage, which spoke of ‘African-American’ cuisine.

But Senegalese it is, and exuberantly so.  The building obviously started life as a fast food restaurant of some sort (Wendy’s? Rax?) but has been given a thorough going-over.  Vibrant fabrics and Senegalese handicrafts adorn the walls and tables in the dining areas, and the fluorescent ceiling lights were covered with colored gels.  The effect is somewhat psychedelic, and, at least at night, quite dark. 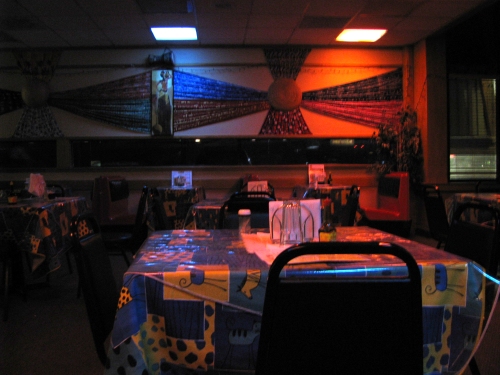 Ordering occurs as one would expect from the fast-food layout, at a counter and from several menu boards scattered about.  The employees manning the counter are friendly and eager to answer questions and explain dishes.  We recommend quizzing them to your hearts content – though the English descriptions are serviceable, there is much be to gained from discussion.  After conversation, we settled on dibbi (Grilled lamb with a side) and maffe (lamb and vegetables in a peanut butter sauce) as well as a selection of Senegalese beverages. 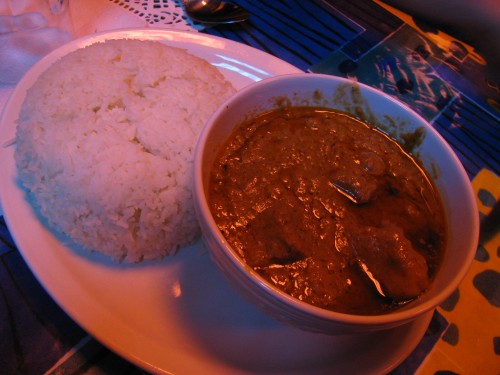 The maffe came out first.

I did.  And then had more.  It was good.  Our preconceptions about peanut butter threw us for a loop – this is a resolutely savory dish.  The peanut imparted very little sweetness, and was well balanced by the tomato component and a bit of spicy heat.  The lamb was bone-on and very tender, and the veggies (carrots and potatoes, to the best of our ability to discern) were a minor presence.  The sauce was the star, though, and we found ourselves ladling it over the rice and sopping it up with the complimentary french bread. 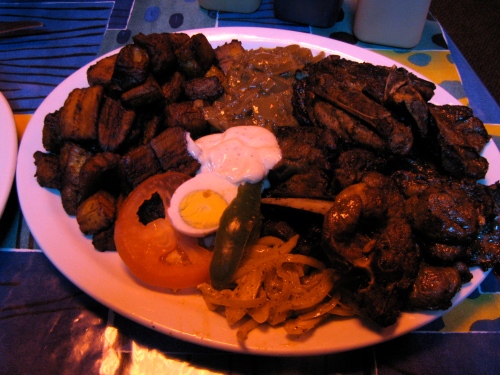 Next came the dibbi – in staggering quantities. There’s easily a pound of grilled lamb on that plate.  Seasoned with salt, pepper, and a ‘cajun spice’, the flavor was quite nice.  Unfortunately, it was a bit overdone for our tastes, though still enjoyable (we took about half home with us and reheated it for lunch today).  The dibbi came with sweet plantains (a bit greasy), two kinds of marinated onions,  half a hard boiled egg, and a slice of tomato and green pepper.

Dabakh makes their own Senegalese beverages, and we tried their bissap (sorrel juice), ginger (no translation necessary), and bouye (juice made from the fruit of the baobab).  The Bissap, to be honest, smelled like a fruity Listerine and tastes like a sweet cherry juice… spiked with Listerine.  Ginger –  Potent stuff!  Excellent for sinus decongestion, or could be good if diluted. Bouye – this gets interesting.  Rich, slightly creamy, and a bit tart, bouye reminded us of the flavor of jackfruit.  Not too sweet, entirely refreshing.  While the bissap and ginger bottles linger in our refrigerator, the bouye disappeared quickly with dinner.

Dabakh, now open for a year, is said to do good lunch business.  All lunch offerings are $7, and all dinners are $10 (unless otherwise noted).  All preparations are halal.

Should you want a primer on Senegalese cuisine, this link provides a good overview.